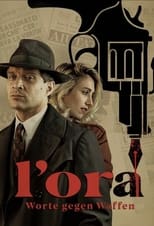 CastBruno Di Chiara, Claudio Santamaria & Silvia D'AmicoNetwork Sky Atlantic Air Date Jan 19th, 2022 Sicily in the 1950s: The sales of the communist daily newspaper "L'Ora" have hit rock bottom when Antonio Nicastro takes over the post of editor-in-chief. With him, a breath of fresh air moves in: he resolutely drives his journalists to uncover the crimes of the Cosa Nostra, which are omnipresent in the region around Palermo. In their research, Nisticò and her journalists penetrate every corner...

Where can you stream L’Ora: Words Against Weapons? DVD/Bluray via Amazon

Netflix
Stay up to date with the streaming options of L’Ora: Words Against Weapons & other streaming releases