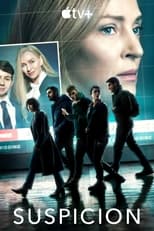 CreatorRob WilliamsCastUma Thurman, Noah Emmerich & Georgina CampbellNetwork Apple TV+ Air Date Feb 4th, 2022 Five ordinary Brits are accused of kidnapping the son of a prominent U.S. media mogul. They embark on a desperate race against time to prove their innocence, but will anyone believe them—and are they telling the truth?

Where can you stream Suspicion? DVD/Bluray via Amazon