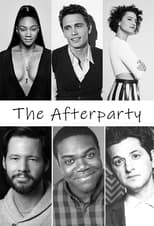 CreatorChristopher MillerCastTiffany Haddish, Sam Richardson & Zoe ChaoNetwork Apple TV+ Air Date Jan 28th, 2022 A murder-mystery comedy set at a high school reunion afterparty. Each of the eight episodes feature a retelling of the same night told through a different character’s perspective, each with its own unique visual format and film genre to match the teller’s personality.

Where can you stream The Afterparty? DVD/Bluray via Amazon