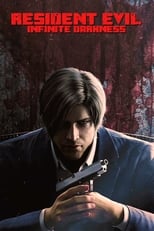 CreatorHiroyuki KobayashiCastToshiyuki Morikawa, Yuko Kaida & Network Netflix Air Date Dec 31st, 2021 In 2006, American federal agent Leon S. Kennedy is among the group invited to the White House to investigate an improper access of the White House's network. When the lights suddenly go out, Leon and the SWAT team are forced to take down a horde of mysterious zombies. Meanwhile, TerraSave staff member Claire Redfield encounters a mysterious image drawn by a youth in a country she visited, while...

Where can you stream Resident Evil: Infinite Darkness? DVD/Bluray via Amazon

Netflix
Stay up to date with the streaming options of Resident Evil: Infinite Darkness & other streaming releases