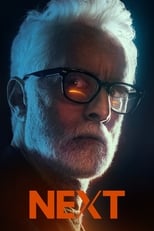 CreatorManny CotoCastJohn Slattery, Fernanda Andrade & Michael MosleyNetwork FOX Air Date Oct 6th, 2020 A Silicon Valley pioneer discovers that one of his own creations – a powerful A.I. – might spell global catastrophe, and teams up with a cybercrime agent to fight a villain unlike anything we’ve ever seen – one whose greatest weapon against us is ourselves.

Where can you stream NEXT?