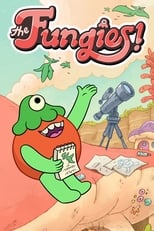 CreatorStephen P. NearyCastN/ANetwork HBO Max Air Date Aug 20th, 2020 Long ago on prehistoric Earth lived a bustling town of colorful mushroom folk - The Fungies! Seth, a science-minded 10-year-old Fungie kid, is fascinated by how the world works and wants to tell Fungietown all about it. With a little help from his artistic older brother, Pascal, Seth stirs up trouble for Fungietown, leading him to hilarious and heartwarming emotional discoveries. The Fungies have...

Where can you stream The Fungies!? DVD/Bluray via Amazon

Netflix
Stay up to date with the streaming options of The Fungies! & other streaming releases