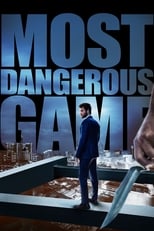 CreatorNick SantoraCastLiam Hemsworth, Christoph Waltz & Sarah GadonNetwork Quibi Air Date Apr 6th, 2020 Desperate to take care of his pregnant wife before a terminal illness can take his life, Dodge Maynard accepts an offer to participate in a deadly game where he soon discovers that he’s not the hunter… but the prey.

Where can you stream Most Dangerous Game? DVD/Bluray via Amazon