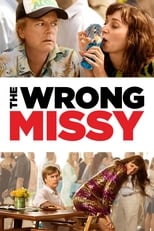 Director Tyler Spindel CastDavid Spade, Lauren Lapkus & Candace SmithRelease May 13th, 2020 A guy meets the woman of his dreams and invites her to his company's corporate retreat, but realizes he sent the invite to the wrong person.
The Wrong Missy is directed by Tyler Spindel and was released on May 13th, 2020.

Where can you stream The Wrong Missy: