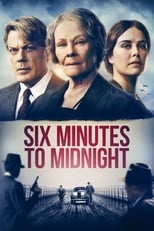 Director Sarah Townsend CastJudi Dench, James D'Arcy & Jim BroadbentRelease Mar 26th, 2021 Summer 1939. Influential families in Nazi Germany have sent their daughters to a finishing school in an English seaside town to learn the language and be ambassadors for a future looking National Socialist. A teacher there sees what is coming and is trying to raise the alarm. But the authorities believe he is the problem.
Six Minutes to Midnight is directed by Sarah Townsend and was released on Mar 26th, 2021.

Where can you stream Six Minutes to Midnight: