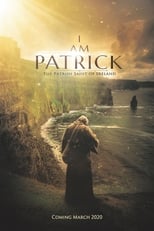 Director Jarrod Anderson CastJohn Rhys-Davies, Moe Dunford & Seán T. Ó MeallaighRelease Mar 17th, 2020 Synopsis In this intriguing documentary, truths are revealed behind the legend of Saint Patrick, a man of great religious myth from centuries long ago. How did such a figure rise from the ranks of a mere man into the higher title of being a saint? This film aims to answer that question through a series of historical reenactments, readings of Patrick’s own writings, and numerous interviews from historical experts. This is the directorial debut of writer/director Jarrod Anderson.
I Am Patrick is directed by Jarrod Anderson and was released on Mar 17th, 2020.

Where can you stream I Am Patrick: Not yet streaming online