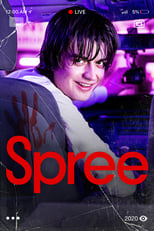 Director Eugene Kotlyarenko CastJoe Keery, Sasheer Zamata & David ArquetteRelease Aug 14th, 2020 Synopsis Russian-born Eugene Kotlyarenko enters the thriller-comedy, Spree, to the 2020 Sundance Film Festival. Entered in the NEXT section, the film stars Joe Keery, Sasheer Zamata, David Arquette, Kyle Mooney, Mischa Barton, and Josh Ovalle. Gene McHugh co-writes the film alongside Kotlyarenko, who directs the film. It premieres at Sundance on January 24, 2020. Kotlyarenko is up for nomination for the NEXT Innovator Award at Sundance. Production company Forest Hill Entertainment is behind this feature film. Spree is directed by Eugene Kotlyarenko and was released on Aug 14th, 2020.

Where can you stream Spree: