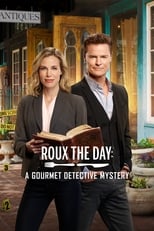 Director Mark Jean Cast, & Release Jan 19th, 2020 Synopsis Dylan Neal writes and stars in the TV movie series, Gourmet Detective. The episode, Roux of the Day: A Gourmet Detective Mystery was shown on January 19, 2020 over at Hallmark Movies and Mysteries in the US. Brooke Burns also stars as Detective Maggie Price, opposite Neal’s Henry Ross character. Mark Jean directs from the story co-written by Neal and Becky Southwell. The production company behind this mystery drama is Muse Entertainment Enterprises. The series is based on Peter King’s book series of the same name. Gourmet Detective: Roux the Day is directed by Mark Jean and was released on Jan 19th, 2020.

Where can you stream Gourmet Detective: Roux the Day:

Netflix
Stay up to date with the steaming options of Gourmet Detective: Roux the Day & other streaming releases