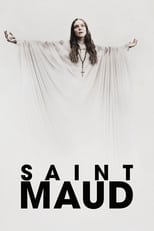 Director Rose Glass CastJennifer Ehle, Morfydd Clark & Lily FrazerRelease Feb 12th, 2021 Synopsis Morfydd Clark and Jennifer Ehle headline the psychological horror film written and directed by Rose Glass. This is Glass’ directorial debut. The film is presented by Escape Plan Productions, Film4 Productions, and the British Film Institute. Glass got a Special Commendation in the Official Competition section of the London Film Festival and received praises from jury president, Wash Westmoreland. Saint Maud did its round of film festivals, starting with the Toronto International Film Festival, then on to Fantastic Fest and the BFI London Film Festival. The US theatrical release will be taken care of by A24, while StudioCanal bought the UK distribution rights. It will be out in cinemas on March 27, 2020 and May 1, 2020 in the US and the UK respectively.
Saint Maud is directed by Rose Glass and was released on Feb 12th, 2021.

Where can you stream Saint Maud: