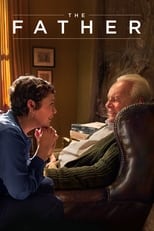 Director Florian Zeller CastAnthony Hopkins, Olivia Colman & Olivia WilliamsRelease Feb 26th, 2021 Synopsis Based on the award-winning play, Le Fere, written by Florian Zeller, Zeller writes and directs the movie adaptation, The Father. Christopher Hampton co-writes the screenplay along with Zeller. The drama is topbilled by Anthony Hopkins as Anthony, Olivia Colman as Anne, Olivia Williams as Catherine, Rufus Gatiss as Paul, and Imogen Potts as Laura. It was entered in the 2020 Sundance Film Festival and was shown starting January 27, 2020. Les Films Du Cru, Film4 Productions, Trademark Films, and Embankment Films present the drama production to be released by Sony Pictures Classics in the US and Lionsgate in the UK. The Father is directed by Florian Zeller and was released on Feb 26th, 2021.

Where can you stream The Father: