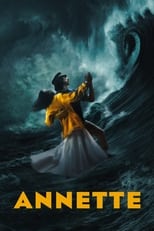 Director Leos Carax CastAdam Driver, Marion Cotillard & Simon HelbergRelease Aug 20th, 2021 Synopsis From the script and music of Ron and Russ Mael, French director Alex Christophe Dupont, better known as Leos Carax, makes his English-language directorial debut via the musical drama, Annette. The production stars Adam Driver as stand-up comic Henry McHenry and Marion Cotillard as Henry’s wife, Ann DelGreco. Simon Helberg joins them as The Conductor. CG Cinema and Tribus P Films produced the film, with Amazon Studios distributing. There were initial plans to have Rooney Mara and Rihanna star in the film but this fizzled out after Amazon Studios bought the distribution rights. Michelle Williams joined the cast later on, only to be replaced by Marion Cotillard eventually. Production was delayed due to Driver’s involvement in Star Wars. The film was able to wrap up in November 2019, with no release date announcement yet. Annette is directed by Leos Carax and was released on Aug 20th, 2021.

Where can you stream Annette: '