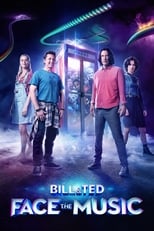 Director Dean Parisot CastKeanu Reeves, Alex Winter & William SadlerRelease Aug 28th, 2020 Synopsis Keanu Reeves and Alex Winter come back to the big screen as Bill Preston and Ted Logan in the third installment to the Bill and Ted franchise. Dean Parisot directs Bill and Ted Face the Music, from the script of Chris Matheson and Ed Solomon. William Sadler rejoins Reeves and Winter as the Grim Reaper. The script for the film has been ready and waiting for a production company to pick it up as early as 2010. While waiting, several script revisions took place, and Reeves and Winter kept interest up by talking to the media about the third installment. Orion Pictures, Hammerstone Studios, Dial 9, Dugan Entertainment, TinRes Entertainment came in to produce the film and United Artists Releasing got involved to handle the distribution. The target movie release date is August 21, 2020. Bill & Ted Face the Music is directed by Dean Parisot and was released on Aug 28th, 2020.

Where can you stream Bill & Ted Face the Music: