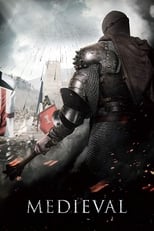 Director Petr Jákl CastBen Foster, Til Schweiger & William MoseleyRelease Feb 25th, 2021 Synopsis English language, Czech-made biopic about Jan Žižka, one of the most notorious and effective military leaders of history. Medieval is directed by Petr Jákl and was released on Feb 25th, 2021.

Where can you stream Medieval: Not yet streaming online