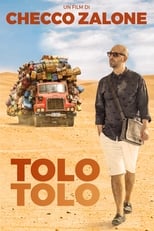 Director Checco Zalone CastChecco Zalone, Manda Touré & Nassor Said BiryaRelease Jan 1st, 2020 Checco is a young Apulian entrepreneur dreamer who has opened a sushi restaurant in his Apulia. However, after one month, the restaurant went bankrupt and he chose to emigrate to Africa to escape from debt. Here he adapts to being a waiter in a resort in Kenya, but at the outbreak of a civil war he decides to embark on a stowaway trip on a boat for migrants to Europe and chooses to do it with his...
Tolo Tolo is directed by Checco Zalone and was released on Jan 1st, 2020.

Where can you stream Tolo Tolo: Not yet streaming online