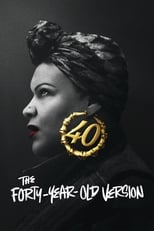 Director Radha Blank CastPeter Y. Kim, Oswin Benjamin & Radha BlankRelease Oct 9th, 2020 Synopsis Radha Blank goes all out for the comedy The 40-year-old Version. She writes, directs, and stars in the movie produced by Lena Waithe. Also starring with Blank in this black and white film are Peter Y. Kim, Oswin Benjamin, Reed Birney, Imani Lewis, and TJ Atoms. This is rapper Benjamin's acting debut. It was also a product of the 2017 Sundance Screenwriters and Directors labs. It is set to be screened at the Sundance Film Festival on January 25, 2020.
The 40-Year-Old Version is directed by Radha Blank and was released on Oct 9th, 2020.

Where can you stream The 40-Year-Old Version: