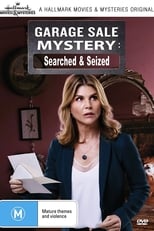 Director N/A CastLori Loughlin, April Telek & Sarah StrangeRelease Aug 4th, 2019 Synopsis Garage Sale Mysteries: Searched and Seized is the 16th TV movie in the Garage Sale Mystery series shown over Hallmark Movies and Mysteries (US), Bravo (Canada), and Channel 5 (UK). Lori Loughlin leads the cast as Jennifer Shannon, the main character in the series. Searched and Seized also stars Hannah Bourne, Sarah Strange, Daniel Bacon, and Linden Banks. The release of Searched and Seized has been put on hold since Loughlin's indictment over the college admissions bribery scandal. Her contract with Crown Media has been terminated and it has left the 16th to 19th installments up in the air. They were supposed to be released starting August 2019. There are also rumors about recasting the remaining episodes, wherein the 19th episode only has a week of filming left. The series' pilot came out in 2013.
Garage Sale Mysteries: Searched & Seized is directed by N/A and was released on Aug 4th, 2019.

Where can you stream Garage Sale Mysteries: Searched & Seized: Not yet streaming online

No trailer released yet
Stay up to date with the streaming options of Garage Sale Mysteries: Searched & Seized & other streaming releases