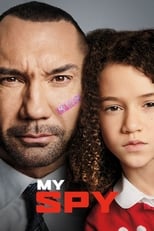 Director Peter Segal CastDave Bautista, Kristen Schaal & Parisa Fitz-HenleyRelease Jun 26th, 2020 Synopsis Dave Bautista topbills the action comedy My Spy. He is joined by Kristen Schaal, Parisa Fitz-Henley, Chloe Coleman, and Ken Jeong. Peter Segal directs the film from the screenplay of Jon Hoeber and Erich Hoeber. It is produced by STX Entertainment and MWM Studios, and will be distributed by STX films. Australian audiences will be able to watch it in theaters on January 9, 2020.
My Spy is directed by Peter Segal and was released on Jun 26th, 2020.

Where can you stream My Spy: '