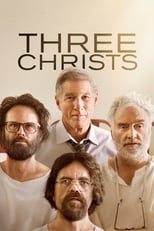 Director Jon Avnet CastWalton Goggins, Peter Dinklage & Richard GereRelease Jan 3rd, 2020 Synopsis Jon Avnet goes the whole 9 yards for Three Christ's, taking on producing, writing, and directing the film. Eric Nazarian co-wrote the screenplay with Avnet, which is based on Milton Rokeach's book, The Three Christs of Ypsilanti. Richard Here leads the cast and is joined by Julianna Marguilies, Peter Dinklage, Walton Goggins, And Bradley Whitford. Filming began in August 2016 and was first seen at the Toronto Film Festival in September 2017. IFC Films is set to distribute the drama in the US starting January 10, 2020.
Three Christs is directed by Jon Avnet and was released on Jan 3rd, 2020.

Where can you stream Three Christs: