A Tale of Three Sisters 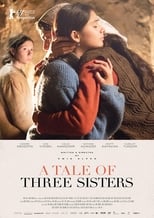 Where can you stream A Tale of Three Sisters: Not yet streaming online