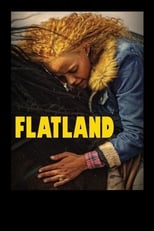 Director Jenna Cato Bass CastNicole Fortuin, De Klerk Oelofse & Sárközi OlivérRelease Feb 7th, 2019 Synopsis Faith Baloyi, Nicole Fortuin, and Izel Bezuidenhout topbill the South African Western-type adventure movie, Flatland. Written and directed by Jenna Cato Bass, the movie was released in Germany in February 2019 before being screened at the Toronto International Film Festival, under the Contemporary World Cinema section. The film is produced by Proper Film, Deal Productions, In Good Company, and unafilm, and distributed by The Match Factory worldwide, in all media.
Flatland is directed by Jenna Cato Bass and was released on Feb 7th, 2019.

Where can you stream Flatland: Not yet streaming online