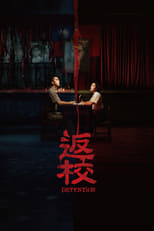 Director John Hsu CastGingle Wang, Chin-Hua Tseng & Fu Meng BoRelease Sep 20th, 2019 Synopsis From director John Hsu and writers Lee Lieh and Lee Yao-hua come the psychological horror film, Detention (Chinese title: 返校). Starring Gingle Wang, Fu Meng-po, and Tseng Ching-hua, the film came out in September 2019 in Taiwan and in December 2019 in Hongkong and Singapore. Its Malaysian debut is in January 2020. Hsu also served as a co-writer, along with Fu Kai-ling and Chien Shi-keng. This Taiwanese thriller is produced by 1 Production Film Co and Filmagic Pictures, and distributed by Warner Bros. Taiwan. It grossed NTD 259 million at the box office, from a budget of NTD 95 million. Detention is directed by John Hsu and was released on Sep 20th, 2019.

Where can you stream Detention: Not yet streaming online