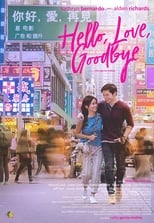 Director Cathy Garcia-Molina CastKathryn Bernardo, Alden Richards & Maymay EntrataRelease Aug 9th, 2019 Synopsis Hello, Love, Goodbye is the first Filipino movie to put together 2 major stars from competing television networks. This Filipino romance stars Kathryn Bernardo and Alden Richards under the direction of Cathy Garcia-Molina. Garcia-Molina co-writes the screenplay with Carmi Raymundo and Crystal San Miguel. Produced by Carlo Katigbak and Olivia Lamasan, the film is produced and distributed by Star Cinema. It was released in Philippine theaters in July 2019, then in August 2019 in the US, and in August 2019 in the Middle East. It is the highest-grossing Filipino movie to-date at USD 17.3 million. Hello, Love, Goodbye is directed by Cathy Garcia-Molina and was released on Aug 9th, 2019.

Where can you stream Hello, Love, Goodbye: