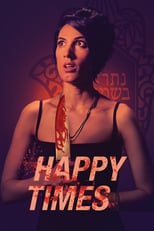 Director Michael Mayer CastShani Atias, Michael Aloni, Iris Bahr, Stéfi CelmaRelease Feb 23rd, 2021 Synopsis The film takes place over the course of a Shabbat dinner at a fancy Hollywood Hills mansion, during which a toxic mix of alcohol, inflated egos, cultural differences between Jews and non-Jews, lust and greed derails the evening, and things started to go out of control. Secrets would reveal flaws in character, relationships are tested and getting out in one piece will be the ultimate challenge for the guests. The film is directed by Michael Mayer. It received rave reviews. One such review said, “Every butchered body and every murder terrifies you, but also makes you laugh at the same time.”
Happy Times is directed by Michael Mayer and was released on Feb 23rd, 2021.

Where can you stream Happy Times: