Tigers Are not Afraid 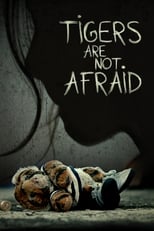 Director Issa López CastPaola Lara, Juan Ramón López & Ianis GuerreroRelease Nov 2nd, 2017 Synopsis With a Spanish title of Vuelven, Tigers are Not Afraid is a crime fantasy movie written and directed by Issa Lopez. It is headlined by Paola Lara, Juan Ramon Lopez, Ianis Guerrero, Rodrigo Cortes, Hanssel Casillas, Meet Arredondo, and Tenoch Huerta. Produced by Filmadora Nacional and Peligrosa, the drama is distributed by Videocine. It began its theatrical run in Mexico on November 2, 2019. The critically acclaimed movie got a 97% approval rating from Rotten Tomatoes. It was screened at the Calgary Underground Film Festival and the Bilbao Fantasy Film Festival where it won Lopez the Best Film, Best Script, Best Narrative Feature Awards. It also bagged the Breakthrough Actor Award for Juan Ramon Lopez from the Ariel Awards.
Tigers Are not Afraid is directed by Issa López and was released on Nov 2nd, 2017.

Where can you stream Tigers Are not Afraid: