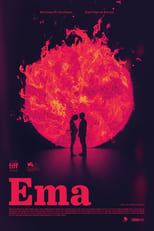 Director Pablo Larraín CastMariana Di Girolamo, Gael García Bernal & Santiago CabreraRelease Aug 13th, 2021 Synopsis Ema is a Chilean drama directed by Pablo Larraín, from a screenplay by Guillermo Calderón and Alejandro Moreno. It stars Mariana Di Girolamo as Ema. Also in the film are Cristian Suares, Gael García Bernal, Paola Giannini and Santiago Cabrera. After a shocking incident upends her family life and marriage to a tempestuous man, Ema, a dancer, sets out on an journey of personal liberation, in this incendiary drama about art, desire, and the modern family. Di Girolamo’s portrayal projects a force of nature full of emotions that affect the film. It had its world premiere at the Venice Film Festival on August 30, 2019. Ema is directed by Pablo Larraín and was released on Aug 13th, 2021.

Where can you stream Ema: