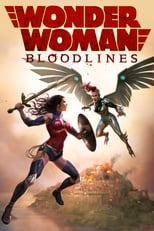 Director Justin Copeland, Sam Liu CastRosario Dawson, Marie Avgeropoulos & Jeffrey DonovanRelease Oct 5th, 2019 When Amazon princess Diana of Themyscira chooses to save fighter pilot Steve Trevor, it’s a choice that will change her world and ours. Fulfilling the role of both ambassador as well as protector, Diana earns the name Wonder Woman from the gracious people of Earth. But her heart is as strong as her will as she is determined to help a troubled and embittered young girl whom has fallen in with a...
Wonder Woman: Bloodlines is directed by Justin Copeland, Sam Liu and was released on Oct 5th, 2019.

Where can you stream Wonder Woman: Bloodlines:

Netflix
Stay up to date with the streaming options of Wonder Woman: Bloodlines & other streaming releases