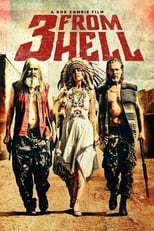 Director Rob Zombie CastSheri Moon Zombie, Bill Moseley & Sid HaigRelease Sep 16th, 2019 After barely surviving a furious shootout with the police, Baby Firefly, Otis Driftwood and Captain Spaulding are behind bars. But pure evil cannot be contained. Teaming up with Otis’ half-brother Winslow, the demented Firefly clan escape to unleash a whole new wave of murder, madness and mayhem.
3 from Hell is directed by Rob Zombie and was released on Sep 16th, 2019.

Where can you stream 3 from Hell: