Capsized: Blood in the Water 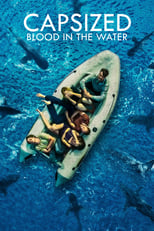 Director Roel Reiné CastJosh Duhamel, Tyler Blackburn & Rebekah GrafRelease Jul 31st, 2019 Based on the harrowing true story of an October 1982 shark encounter. After a yacht bound for Florida capsizes during an unexpected storm, its crew is left to drift for days in the chilling waters of the Atlantic where they become prey to a group of tiger sharks. With the hope of rescue dwindling, the crew must do everything in their power to survive as the sharks continue to hunt them.
Capsized: Blood in the Water is directed by Roel Reiné and was released on Jul 31st, 2019.

Where can you stream Capsized: Blood in the Water: Not yet streaming online

Netflix
Stay up to date with the streaming options of Capsized: Blood in the Water & other streaming releases