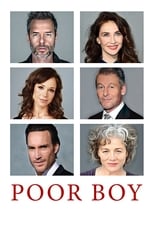 Director Guy Pearce CastGuy Pearce, Carice van Houten & Frances O'ConnorRelease TBA A little boy announces on his seventh birthday that he is a stranger named Danny, a grown man who died seven years earlier.
Poor Boy is directed by Guy Pearce and was released on TBA.

Where can you stream Poor Boy: Not yet streaming online