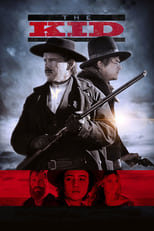 Director Vincent D'Onofrio CastVincent D'Onofrio, Chris Pratt, Ethan Hawke, Dane DeHaanRelease Mar 8th, 2019 New Mexico Territory, 1880. Rio Cutler and his older sister Sara must abandon their home after an unfortunate event happens. In their desperate flee to Santa Fe, they cross paths with the infamous outlaw Billy the Kid and his gang, who are ruthlessly pursued by a posse led by Sheriff Pat Garret.
The Kid is directed by Vincent D'Onofrio and was released on Mar 8th, 2019.

Where can you stream The Kid: