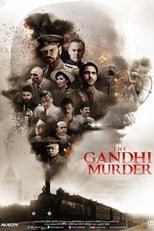 Director Pankaj Sehgal CastVinnie Jones, Stephen Lang & Luke PasqualinoRelease Jan 25th, 2019 Three Senior police officers in different parts of India, who, well aware of the intelligence that Gandhi’s life in under threat, must take key decisions that would eventually either save the Mahatma, or the country.
The Gandhi Murder is directed by Pankaj Sehgal and was released on Jan 25th, 2019.

Where can you stream The Gandhi Murder: Not yet streaming online DVD/Bluray via Amazon