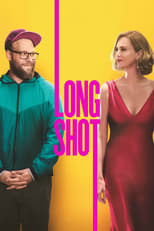 Director Jonathan Levine CastSeth Rogen, Charlize Theron & Alexander SkarsgårdRelease May 3rd, 2019 Journalist Fred Flarsky reunites with his childhood crush, Charlotte Field, now one of the most influential women in the world. As she prepares to make a run for the Presidency, Charlotte hires Fred as her speechwriter — much to the dismay of her trusted advisers.
Long Shot is directed by Jonathan Levine and was released on May 3rd, 2019.

Where can you stream Long Shot: