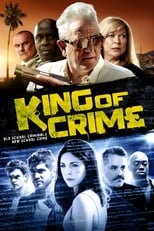 Director Matt Gambell CastClaire King, Mark Wingett & Rachel BrightRelease Nov 2nd, 2018 Marcus King, an old school gangster, a crime lord, has left behind old school crime. He has manoeuvred his business into the leafy lanes of the suburbs and now, in place of pimps and dealers, his team consists of the best graduate geeks that money can bribe. No brothels, no casinos and no drugs - he's dragged serious, organised crime well and truly into the twenty-first century. From credit card...
King of Crime is directed by Matt Gambell and was released on Nov 2nd, 2018.

Where can you stream King of Crime: