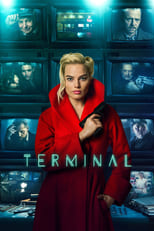 Director Vaughn Stein CastMargot Robbie, Simon Pegg & Dexter FletcherRelease May 11th, 2018 In the dark heart of a sprawling, anonymous city, two assassins carry out a sinister mission, a teacher battles a fatal illness, and an enigmatic janitor and a curious waitress lead dangerous double lives. Murderous consequences unravel in the dead of night, as their lives intertwine at the hands of a mysterious criminal mastermind who is hell-bent on revenge.
Terminal is directed by Vaughn Stein and was released on May 11th, 2018.

Where can you stream Terminal: