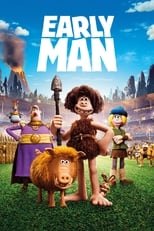 Director Nick Park CastEddie Redmayne, Tom Hiddleston & Maisie WilliamsRelease Feb 16th, 2018 Dug, along with his sidekick Hognob, unite a cavemen tribe to save their hidden valley from being spoiled and, all together as a team, to face the menace of a mysterious and mighty enemy, on the turf of an ancient and sacred sport.
Early Man is directed by Nick Park and was released on Feb 16th, 2018.

Where can you stream Early Man: