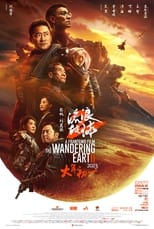 Director Frant Gwo CastAndy Lau, Wu Jing & Qiu TianRelease Jan 22nd, 2023 Humans built huge engines on the surface of the earth to find a new home. But the road to the universe is perilous. In order to save earth, young people once again have to step forward to start a race against time for life and death.
The Wandering Earth 2 is directed by Frant Gwo and was released on Jan 22nd, 2023.

Where can you stream The Wandering Earth 2: Not yet streaming online