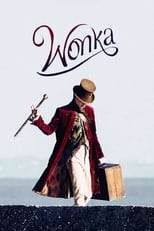 Director Paul King CastTimothée Chalamet, Sally Hawkins & Olivia ColmanRelease Dec 15th, 2023 A young Willy Wonka embarks on a mission to spread joy through his chocolate, which quickly becomes a phenomenon.
Wonka is directed by Paul King and will premiere on Dec 15th, 2023.

Where can you stream Wonka: Not yet streaming online