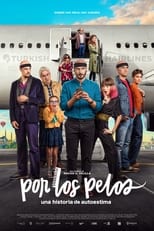 Director Nacho G. Velilla CastAntonio Pagudo, Carlos Librado & Tomy AguileraRelease Aug 12th, 2022 Juanjo (Antonio Pagudo) is a forty-year-old man who, despite not having low self-esteem due to his baldness, his wife, Inma (Eva Ugarte), obsessed with image and aesthetics, is in charge of making him complex about it. On the other hand, his friend Sebas (Carlos Librado "Nene") is affected by his lack of hair and is willing to do whatever it takes to regain his younger version, something that...
Por los pelos is directed by Nacho G. Velilla and was released on Aug 12th, 2022.

Where can you stream Por los pelos: Not yet streaming online