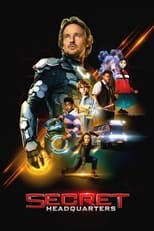 Director Henry Joost, Ariel Schulman CastOwen Wilson, Michael Peña & Walker ScobellRelease Aug 5th, 2022 While hanging out after school, Charlie and his friends discover the headquarters of the world’s most powerful superhero hidden beneath his home. When villains attack, they must team up to defend the headquarters and save the world.
Secret Headquarters is directed by Henry Joost, Ariel Schulman and was released on Aug 5th, 2022.

Where can you stream Secret Headquarters: