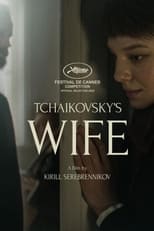 Director Kirill Serebrennikov CastAlena Mikhaylova, Odin Lund Biron & Nikita ElenevRelease May 18th, 2022 Antonina Miliukova is a beautiful and bright young woman, born in the aristocracy of 19th century Russia. She could have anything she'd want, and yet her only obsession is to marry Pyotr Tchaikovsky, with whom she falls in love from the very moment she hears his music. The composer finally accepts this union, but after blaming her for his misfortunes and breakdowns, his attempts to get rid of his...
Tchaikovsky’s Wife is directed by Kirill Serebrennikov and was released on May 18th, 2022.

Where can you stream Tchaikovsky’s Wife: Not yet streaming online