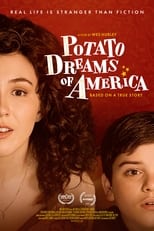 Director Wes Hurley CastMarya Sea Kaminski, Tyler Bocock & Jonathan BennettRelease Aug 4th, 2022 A true story about a gay boy growing up in the collapsing USSR, his courageous mail-order bride mother, and their adventurous escape to Seattle in the 90s.
Potato Dreams of America is directed by Wes Hurley and was released on Aug 4th, 2022.

Where can you stream Potato Dreams of America: Not yet streaming online DVD/Bluray via Amazon