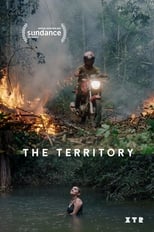 Director Alex Pritz Cast, & Release Jan 22nd, 2022 The Indigenous Uru-eu-wau-wau people have seen their population dwindle and their culture threatened since coming into contact with non-Native Brazilians. Though promised dominion over their own rainforest territory, they have faced illegal incursions from environmentally destructive logging and mining, and, most recently, land-grabbing invasions spurred on by right-wing politicians like President...
The Territory is directed by Alex Pritz and was released on Jan 22nd, 2022.

Where can you stream The Territory: Not yet streaming online