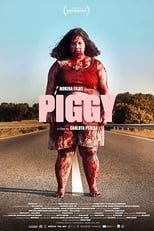 Director Carlota Pereda CastLaura Galán, Richard Holmes & Carmen MachiRelease TBA With the summer sun beating down on her rural Spanish town, Sara hides away in her parent’s butcher shop. A teenager whose excess weight makes her the target of incessant bullying, she flees a clique of capricious girls who torment her at the town pool, only to stumble upon them being brutally kidnapped by a stranger.
Piggy is directed by Carlota Pereda and was released on TBA.

Where can you stream Piggy: Not yet streaming online