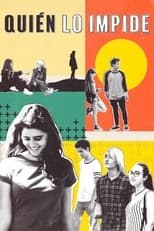 Director Jonás Trueba CastCandela Recio, Pablo Hoyos & Silvio AguilarRelease Apr 20th, 2022 Quién lo impide is a call to change our perception of adolescents and youths; our idea of those born in the early 21st century who have recently reached adulthood; those who now seem guilty of everything as they themselves see their hopes dashed. Somewhere between documentary, fiction and pure testimonial record, the young adolescents show themselves the way they really are, the way we rarely see...
Who’s Stopping Us is directed by Jonás Trueba and was released on Apr 20th, 2022.

Where can you stream Who’s Stopping Us: Not yet streaming online