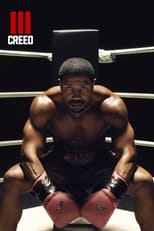 Director Michael B. Jordan CastMichael B. Jordan, Tessa Thompson & Phylicia RashādRelease Mar 3rd, 2023 After dominating the boxing world, Adonis Creed has been thriving in both his career and family life. When a childhood friend and former boxing prodigy, Damien Anderson, resurfaces after serving a long sentence in prison, he is eager to prove that he deserves his shot in the ring. The face-off between former friends is more than just a fight. To settle the score, Adonis must put his future on the...
Creed III is directed by Michael B. Jordan and will premiere on Mar 3rd, 2023.

Where can you stream Creed III: Not yet streaming online