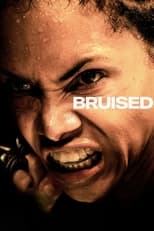 Director Halle Berry CastHalle Berry, Adan Canto & Adriane LenoxRelease Nov 24th, 2021 Jackie Justice is a mixed martial arts fighter who leaves the sport in disgrace. Down on her luck and simmering with rage and regret years after the fight, she's coaxed into a brutal underground fight by her manager and boyfriend Desi and grabs the attention of a fight league promoter who promises Jackie a life back in the Octagon. But the road to redemption becomes unexpectedly personal when...
Bruised is directed by Halle Berry and was released on Nov 24th, 2021.

Where can you stream Bruised: